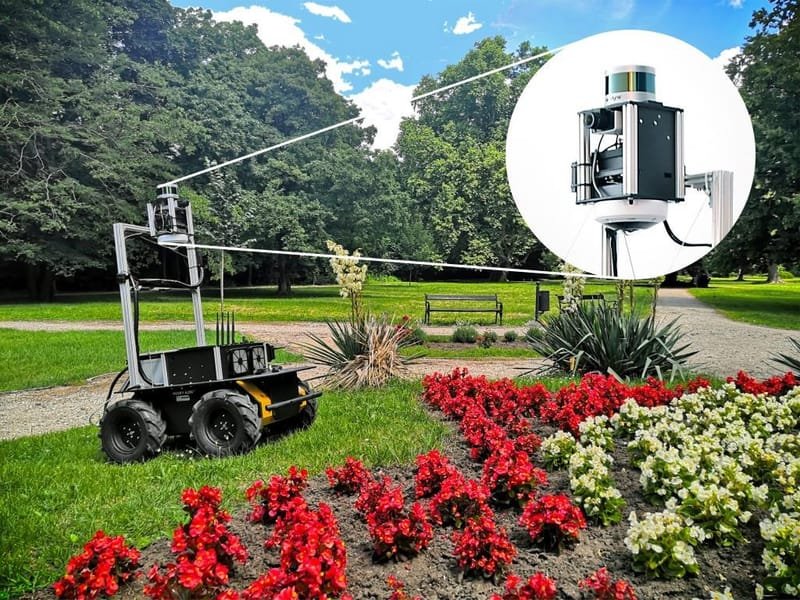 Thanks to the RTV sensor developed by RoboTech Vision, the mobile robot can move autonomously in both open and fragmented spaces between buildings, trees, or on streets. The robot can plan the way to the destination and also the passage through difficult intersections. It recognizes objects and bypasses both static and dynamic obstacles.

The RTV sensor is a universal device that simply moves from robot to robot and fulfills the same purpose - it is given its own eyes and reasons. The sensor combines a 360 ° camera that is used to segment the path, a forward camera for object detection and a 3D scanner that creates an idea of the size and distance of obstacles.

The company uses individual software components of the sensor, such as face and object recognition or voice commands, also for other projects. An example is their own intelligent CCTV system, which differentiates between people and animals, or the Entry system with face recognition and license plates. The CCTV system can be connected to an autonomous drone or a Husky robot that performs autonomous patrols of the guarded object.

RoboTech Vision is a robotic company that focuses on software development in the field of autonomous navigation algorithms, artificial intelligence, neural networks, visual systems, and voice commands. The company tests its algorithms on multiple robotic platforms and tries to develop universal solutions that can be used in different industries, environments, and for different types of tasks.

From the ground up, the company  has developed its own autonomous robot Androver II that uses AI elements. The robot contains all the parts of their know-how achieved so far, but the individual software elements of the robot can also be used for other projects. An example is the company's own intelligent CCTV system, which can distinguish between people and animals, or the Entry system with face recognition and license plates.

RoboTech vision software solutions can be applied mainly in areas such as industry, logistics, agriculture, geology, and military. The company also focuses on customer-specific tasks, in which intelligent algorithms solve complex tasks and rationalize the production process or relieve employees of strenuous or health-threatening work.

I BUILT MY SITE FOR FREE USING